In Phase 1 of the project, we held multi-stakeholder conferences in Zurich, Silicon Valley, and Kuala Lumpur to deepen our understanding of how terrorists exploit the internet and technology services.

This work fed into our development of an online knowledge sharing platform that will form a resource freely accessible to all organizations seeking help and guidance. All our work advocates the strengths of an industry-led, self-regulatory approach to tackling the terrorist use of technology, and is informed by the emerging normative framework spearheaded by major technology companies, which is built on the following three pillars:

In total, our work in 2017 was based on the following model: 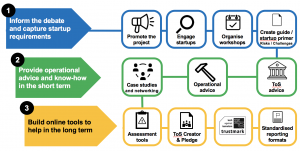