Tech Against Terrorism – May 2020 Update

Tech Against Terrorism held a virtual meeting for its Advisory Group and Experts Committee on 27 May. This meeting followed up on the meeting held last year at the United Nations Counter Terrorism Directorate (UN CTED) headquarters in New York during the UN General Assembly week. In this month’s meeting Tech Against Terrorism provided an update on its work in 2020 around its core activities around outreach, knowledge-sharing, and practical support for the tech sector. The meeting saw opening remarks from ASG Michele Coninsx, Executive Director of UN CTED. Tech Against Terrorism would like to express its gratitude to our stakeholders attending this meeting, including UN CTED, the governments of Canada, United States, United Kingdom, Switzerland, and Jordan, the European Commission, Europol, the Commonwealth, Facebook, Google, Access Now, VOX-Pol, and Swansea University.

Our latest webinar in partnership with the Global Internet Forum to Counter Terrorism (GIFCT) addressed the topic of the tech sector and law enforcement engagement in countering terrorist use of the internet. Opened by Courtney Gregoire, Chief Safety Digital Officer at Microsoft, the webinar saw presentations from Jessica Marasa, Law Enforcement Response Manager at Twitch, Stephanie McCourt, Trust & Safety Outreach Lead at Facebook, Dina Hussein, Counter Terrorism and Dangerous Organisations Policy Manager at Facebook, as well as from the EU Internet Referral Unit at Europol. The webinar aimed to increase understanding of each sector’s online counterterrorism practices, with the tech sector representatives sharing insights on their companies’ work on law enforcement collaboration and digital evidence. 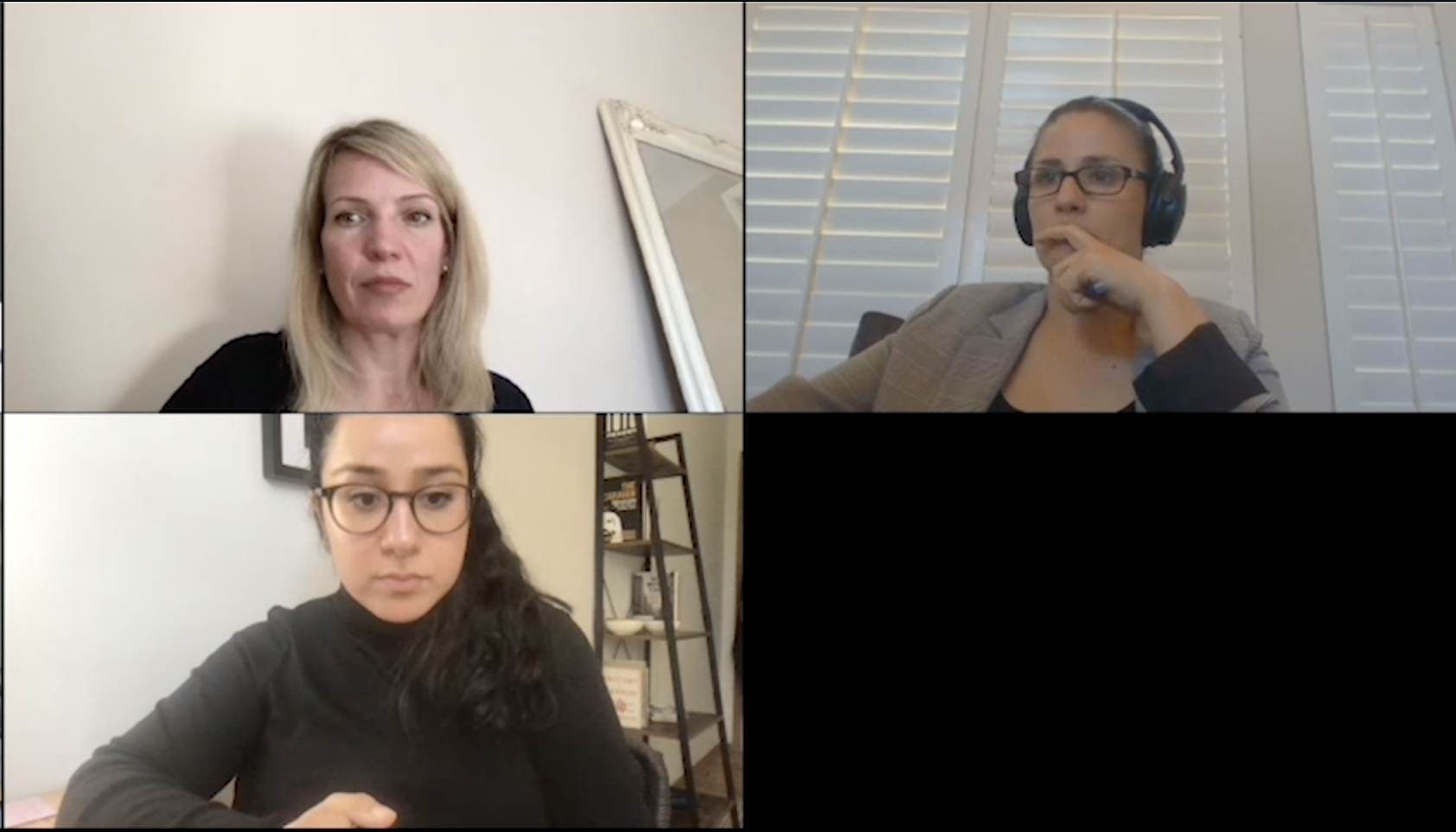 As we continue to develop the Terrorist Content Analytics Platform (TCAP) with support from Public Safety Canada, we organised a virtual meeting to update academics and expert researchers on progress in designing the platform, as well as on how the TCAP will support research on terrorist use of the internet. During this meeting Tech Against Terrorism’s Director, Adam Hadley, provided a background presentation on the TCAP and shared the results of the online consultation process we conducted in 2019. Our Product Manager, Tom Lancaster, also provided an overview on the development progress of the platform and on the TCAP Beta Program. This virtual meeting also saw remarks from Peter King, Independent Consultant on extremist media and Director at IbexMind, as well as from Alexander Corbeil, Research Advisor at Public Safety Canada. Dr. Shiraz Maher, Director at the International Centre for the Study of Radicalisation, provided introductory remarks on the Global Network on Extremism and Technology (GNET), which Tech Against Terrorism recently partnered with.

If you wish to take part in the TCAP Beta Program, or to contribute to the development of the TCAP, please send us an email at [email protected] 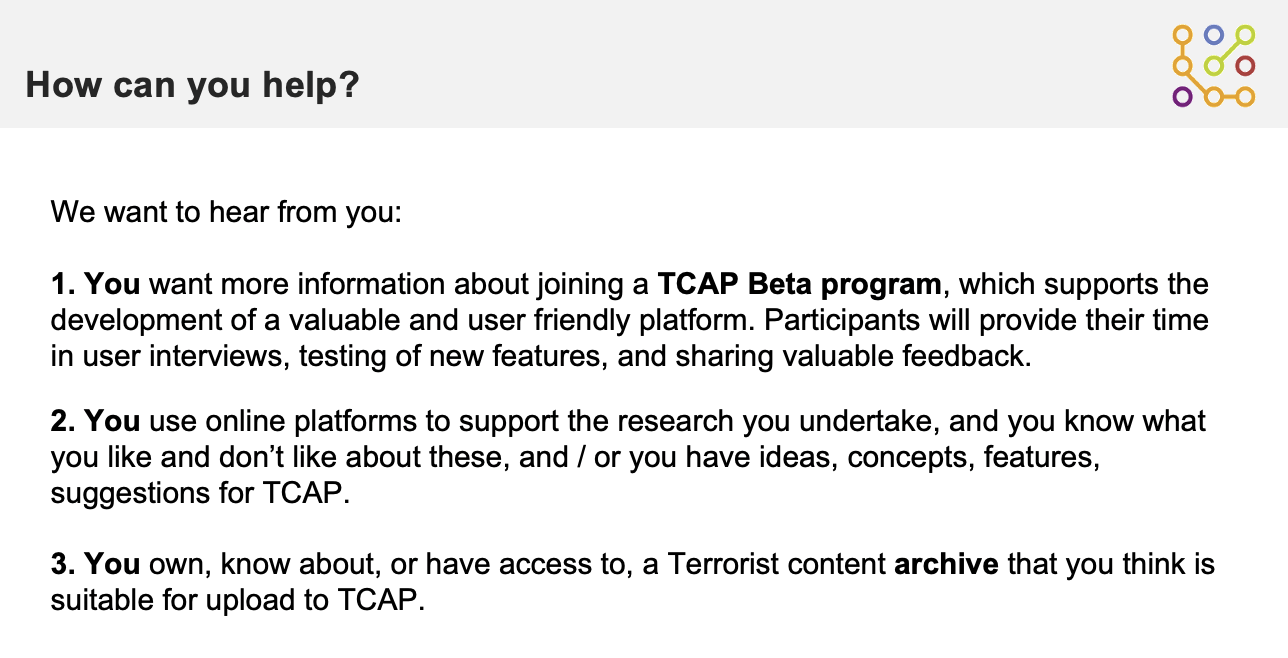 Season 2 of the  Tech Against Terrorism Podcast is still going strong:

– In May we spoke about how terrorists and violent extremists are using gamificationwith Linda Schlegel, a Senior Editor at The Counterterrorism Group and a regular contributor for the European Eye on Radicalization, and Dr. Nick Robinson, an Associate Professor in Politics and International Studies at the University of Leeds.

– In the fourth episode of the season, we discussed the challenges of regulating the online sphere, with a particular focus on terrorist content. We spoke with two leading experts on this topic – Evelyn Douek, a Lecturer in Law and SJD Candidate at Harvard Law School, and Affiliate at the Berkman Klein Center for Internet & Society; and from Daphne Keller, Director of Platform Regulation at Stanford’s Cyber Policy Center.

In April, the US Department of State  proscribed the Russian Imperial Movement as a specially designated global terrorist entity – the first time the US gives such a designation to a far-right violent extremist entity. Tech Against Terrorism welcomes this designation as it will help facilitate an improved tech sector response to online manifestations of far-right terrorism. We encourage states to use legal powers to promote rule of law through comprehensive terrorist designation lists. You can read our blogpost on this designation here.

Our monthly e-learning webinars in partnership with the GIFCT will continue this month with a webinar on intergovernmental organisations (IGOs) and their work countering terrorist use of the internet, during which we will hear from our partners in UN CTED and other international organisations. Following this, the webinar series will continue on the topics of:

More information about the webinars and registration links will be shared shortly.

Don’t forget to follow us on Twitter to be the first to known when our webinar registrations are opened, and when the next episode of the Tech Against Terrorism Podcast is released.

Tech Against Terrorism Reader’s Digest – 29 May

Terrorism and violent extremism use of the internet