Analysis: The use of open-source software by terrorists and violent extremists

Why global coding collaboration benefits everyone – including terrorists and violent extremists.

A large amount of today’s technology is underpinned by open-source licensed code. In some cases, technology is entirely based on open-source, such as most web server technologies, whereas some software partially deploys open-source for some elements. For example the operating system that powers Apple Mac for example partly depends on open-source code. If open-source software disappeared, the whole tech infrastructure including a broad array of software products would break. This is exactly what happened in 2016 when a developer unpublished only 11 lines of his code and disrupted the whole web development industry.

The inherently open nature of open-source benefits everyone, encouraging global collaboration for the greater good. However despite the clear advantages of open-source, its inherently open nature also attracts terrorists and violent extremists. We believe that the current debate around terrorist and violent extremist use of the internet must be broadened to include a much-needed discussion about the decentralised web and open-source licenses, its abuse by various entities, and appropriate human rights compliant measures to prevent this from happening whilst keeping the open-source spirit alive.

Terrorist and (violent) extremists are increasingly using open-source software to facilitate the spread of terrorist and hateful material online. This raises concerns about the impact of giving users the right to use and extend open-source products.

On July 4, 2019, Gab – a social media platform that predominantly attracts alt-right users, conspiracy theorists and other trolls but has also been used by terrorists, such as the Pittsburgh shooter – announced an updated version of its platform. Its developers forked the source code of Mastodon, a free open source and decentralised social network, making Gab now a decentralised platform and considerably more resistant to content moderation efforts. In addition, Gab is now also available on mobile phones through their own app store.

The new Gab: a decentralised network for “alt-right users, conspiracy theorists and other trolls”

The ‘all new Gab Social’ as CEO Andrew Torba called it is open-source and compatible with ActivityPub, a standardised communications protocol for decentralised networks, making decentralisation one of Gab’s main features (Fig.1). 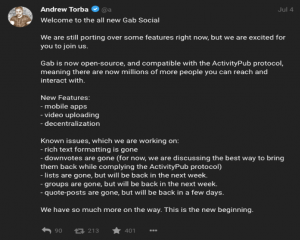 Decentralised networks are very similar to the web we know, but the main difference lies in the “middle man”. To communicate within a decentralised network, users do not rely on a central node or server in the network. Most importantly, decentralisation reverses the current data ownership model by empowering users who will instead have full control over their data.

On Twitter, for example, users rely on Twitter’s servers for hosting, sending and receiving content. Twitter also has the power to remove tweets and suspend or ban accounts that violate their terms of service. With decentralised social networks, however, this would no longer be possible as the content would be spread across the network and not stored in one centralised location.

Mastodon is a Twitter-like decentralised microblogging platform; however, anyone can take a copy of the source code with which developers can create their own decentralised social network. On Mastodon, they are commonly referred to as an ‘instance’.

With Mastodon, it is the ‘instance’ owner who decides what is acceptable and what is not, thus empowering them to set their own community guidelines. There are currently 2684 active instances, with over 2.19 million users worldwide (Fig.2). 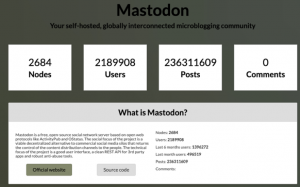 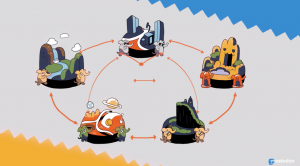 Another key feature which needs to be emphasised in this context is that Mastodon (and decentralised networks in general) “can’t go bankrupt, can’t be sold and can’t be completely blocked by governments”.

Two years ago Mastodon was lauded and labelled by Vice outlet Motherboard as “Twitter without Nazis”. After Gab forked Mastodon, Mastodon’s founder Eugen Rochko told Vice: “You have to understand it’s not actually possible to do anything platform-wide because it’s decentralized […] I don’t have the control”.

The abuse of open-source software and the need for action

Open-source rests on the notion that the more people are involved, the more ideas and innovation can flow into the end product, which consequently benefits the product and subsequently the whole community.

Open-source licenses allow anyone to use, modify and share the code. This includes (as with Gab) those that “welcome users banned or suspended from other social networks”. Gab is not the only example; Jihadoscope recently discovered Islamic State (ISIS) supporters experimenting with Mastodon (Fig.4). This further underlines the argument that open-source software is inherently available to anyone, including terrorists. 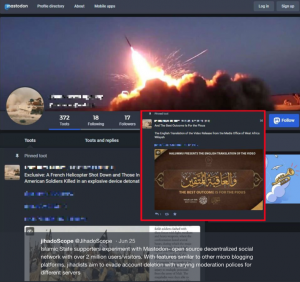 Every open source license has to comply with the “Open Source Definition“, originally derived from the Debian Free Software Guidelines, which set out 10 criteria that any license agreement needs to comply with. Nevertheless, none of these call for a prohibition of the open source product being used against particular individuals or groups.

Developing appropriate and widely accepted countermeasures to curb terrorist and violent extremist use of open-source products is exceptionally challenging and requires extensive discussion between tech experts, policymakers, civil society and others. But in essence, any countermeasure needs to strike the right balance between being human rights-compliant and maintaining the open-source spirit – a key driver for innovation.

When talking about terrorist and violent extremist use of the Internet, academics, practitioners and policymakers now have to take these issues more seriously. As demonstrated in our previous analysis, ISIS has already carried out experiments on the decentralised web – it’s only a matter of time until DWeb applications become more user-friendly and widely accepted. Therefore, we must start a serious discussion about the abuse of the DWeb, and appropriate responses to counter these efforts.

The current debate around terrorist and violent extremist use of the Internet should be broadened to include a much-needed discussion about the decentralised web and open source licenses, its abuse by various entities, and appropriate human rights-compliant measures to prevent this from happening.

The case of Gab is an illustrative example of how decentralisation and open source-software can be combined to build a takedown-resistant platform that houses violent extremist speech. Professor Matthew Feldman, director at the Center for the Analysis of the Radical Right (CARR), recently told Scram news: “Digital technology offers the radical right three things it has long coveted: potential anonymity […] a transnational, global reach and permanent visibility of message.”

It is not only the radical right that aspires to make use of decentralised platforms. ISIS, for instance, has been long keen on finding a viable alternative to Telegram and in theory, they could follow the same path as Gab has done in building a take-down resistant platform by forking open source-code(s).