Tech Against Terrorism was pleased to take part in #TechHubTuesday Demo Night, on February 6. The event was held at Google Campus, in Shoreditch.

The principle is simple – “TechHub Demo Night isn’t about pitching for funds, it’s an opportunity to show the community what you’re working on, get some feedback, and see what others are toiling on”.

Coinciding with the Women’s suffrage centenary, this night focused on showcasing startups that focused on democracy, politics, and campaigning. In a slightly unusual twist, presenters were only allowed three minutes to present their product, and then an additional three minutes for Q&A. As such, demonstrations had to be as succinct as possible. Through a live-audience interaction system named Slido, audiences were able to vote on aspects of the demo such as “I like the idea” and “I’d love to get involved”.

Joining Tech Against Terrorism in taking to the stage to demo their products were:

It was great to see the other social impact startups demonstrate their products. Project Director, Adam Hadley, took to the stage in 5th position and demoed the Knowledge Sharing Platform (KSP – launched at the UN last December) to the audience. The KSP is a collection of interactive tools and resources designed to support the operational needs of smaller tech companies, and to act as a ‘one stop shop” for companies to access practical resources to support their needs to protect their platform from exploitation. The demonstration was well received, and Slido indicated 76% for “I like the idea” and 16% for “I’d love to get involved”.

We will be holding our first London-based workshop of 2018, again in collaboration with TechHub, on Thursday February 15. You can register here.  Thank you to TechHub London and Google Campus for hosting us at the Demo Night, and we look forward to our workshop at TechHub on 15th February (registration). 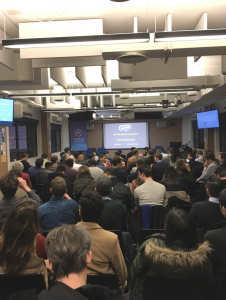